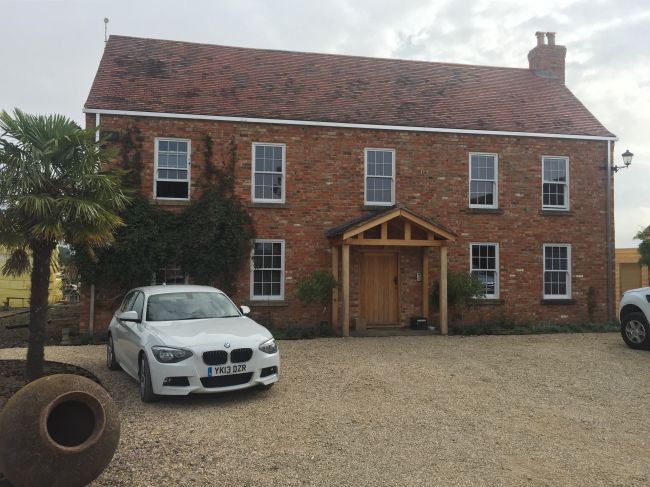 Based in the rural village of Longney, Briery Hall is a large eight bedroom detached family home with a perfect blend of period and modern features. After experiencing several months of inefficient heating from their old LPG fired system, owner Mr Peter Cooke decided to research into alternative renewable heat sources and chose a Windhager biomass boiler.

“I heard about biomass heating through doing my own research as there’s been plenty of news about it in the media. The main attraction for me was the sustainability element. The fact we are going to be planting more trees and not relaying on fossils to heat our homes is great”, commented Peter Cooke.

To achieve his sustainability objectives, Peter contacted experienced MCS registered biomass installers Almondsbury Ecoheat, based in Bristol, to design and install his new system. After considering his options he chose a 26 kW Windhager BioWIN 2 wood-pellet boiler to replace the existing 10l LPG boiler.

On average the previous LPG boiler was costing in circa £2500 per year to heat the property compared to the new biomass boiler. With an estimated 4.8 tonnes of wood pellets required to heat his home per annum, costing approximately £1200 per annum, Peter is set to make a significant saving of £1300 per year. 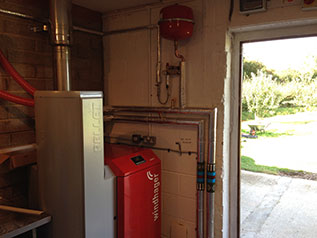 Installed in a standalone cider house adjacent to the main house, the automatically fed BioWIN 2 boiler was integrated into the existing pipework both outdoors and indoors which resulted in very quick turnaround of four days.

“The installation by Nigel and his team was fantastic and quick with no disruption to my daily living. They kept me informed at every step of the installation, which was a huge benefit as our water tank was full of hot water all day. Even though the new boiler was switched on in the evening, we had no loss of water or downtime throughout the day so the heating was always kept on” he continued.

A bespoke fuel store was built onsite to store five tonnes of wood pellets next-door to the where the boiler was installed in the cider house and it is estimated that the property will require only two deliveries of wood pellets per year. The new Windhager MES Controls system installed to control the boiler is a weather compensating system designed to maximise the efficiencies of the heating system, as the flow of heating is relevant to the outside temperature.

In addition to the fuel savings, Peter has also been approved to receive rewards from the Domestic Renewable Heat Incentive (RHI). Over the seven-year period of the scheme, he will receive £5,640 per annum for using biomass to meet his heating demand.

“The RHI savings was the secondary reason for changing to biomass. We all have to do our bit to be sustainable but it still has to stack up financially and thankfully it does. I am expecting to spend approximately £1200 on heating my whole house compared to my previous LPG boiler that wasn’t even heating my whole house but was costing about  £2500 per year.  So I was spending £2500 on a system and getting inefficient heating. I cant even compare the two because the new biomass boiler is much more powerful than my old boiler and it can more than adequately heat the whole property at half the cost”.

<< Back to Domestic Properties